Over the last month investors’ nervousness has come back to the fore with both bond and stock markets moving lower.

This comes on the back of what has already been a challenging start to 2022. We understand that this short term market volatility can feel somewhat uncomfortable and is why in this Luna Perspective we will touch on the reasons for this and what the Luna View is.

The moves in markets are being triggered by three main factors;

1. Inflation levels and the direction of interest rates
Last week we saw two of the major central banks, the Bank of England and the Federal Reserve, move interest rates by 0.25% and 0.5% respectively. In both press conferences the central banks discussed that interest rates look likely to continue to move higher in the coming months, the Bank of England stated “the projections are conditioned on a market-implied path for Bank Rate that rises to around 2.5% by mid-2023”.

The reason interest rates are moving higher is because we are seeing inflation at 30 year high levels and the Bank of England actually highlighted that this could touch 10% in October. This high inflation could start to impact the economy and the Bank of England have warned that recessionary risks are building. The Bank expects the UK economy to hit a pothole later this year, contracting by almost 1% between October and December. GDP is forecast to remain below 2022 levels throughout the whole of next year with growth averaging zero over those twelve months.

The Luna View
Inflationary pressures are likely to continue over the coming months and could spike when the next energy cap is increased in October this year. That being said interest rates are not returning to levels seen in previous cycles because of the indebtedness of the economy.

If the Bank of England base rate increases by 1%, alongside equivalent rises in the cost of longer-term government debt and the inflation rate, it adds £25bn to the UK’s annual bill for debt interest payments. As well as this, central banks have a dual mandate to maintain price stability (inflation) but also to deliver economic growth. Central bankers are acutely aware that if they increase interest rates too high May 2022 then they could push their economies into recession, which they will be extremely keen to avoid.

Whilst there is undoubtedly pressure on the consumer at the moment with increased bills coming from almost everywhere, we enter this environment with the consumer in strong health with higher savings ratios and individuals still willing to spend after two years of restrictions being in place.

From an investment and stock market perspective, not all companies have performed the same in this environment with more growth orientated businesses suffering the most; this is highlighted best by the US Technology index, the Nasdaq, and the FTSE 250, the next biggest companies listed in the UK after the FTSE 100.

We have used this market volatility to enter good quality products and companies that have been indiscriminately sold off this year. From ongoing conversations with our external managers, we can see that there is extreme risk aversion in investor positioning. The gap between the valuations of UK cyclical stocks compared to their defensive peers is at levels seen in the aftermath of 9/11 and the financial crisis. We believe the UK market in particular should be supported by low valuations, above average dividend yields and ongoing corporate activity.

2. China’s ‘Zero-Covid’ strategy
The closures of major cities to try and restrict Covid infection levels in both Shanghai and Beijing is having an impact on both global growth, with China being the second largest global economy, but also global supply chains. The latest measures by China are having further impacts on markets and only this week customs data showed that China’s export growth slowed in April. Export growth fell to 3.9% year-on-year last month, while this was above analysts’ expectations of 2.7% growth according to a Bloomberg poll, it marked the lowest rate since June 2020.

The Luna View
We have been through a number of Covid induced restrictions and reopenings over the course of the last two years. It has often been that just before restrictions are being announced that markets are at their weakest.

On the flip side stock markets have tended to deliver their strongest returns when in restrictions. This is because markets move in anticipation of events, when the event comes along then we have certainty and investors start to look forward. For example, the 23rd March 2020 was the low in the stock market and also the day that Boris Johnson announced that further restrictions would be applied.

China have also announced recently that they are conscious of the economic impact that these new Covid resections are having with President Xi Jinping vowing an ‘all-out’ construction spending spree to save China’s economy. China are looking to come out of these restrictions firing on all cylinders which would be a positive for global growth, and investor sentiment.

3. The ongoing conflict in Ukraine
The sad events in Ukraine most importantly have an horrendous humanitarian impact. But the secondary impact of the war in Ukraine is that on major commodity markets with both Russia and the Ukraine being major producers. This ranges from crude oil and natural gas to wheat. The longer this war goes on, the bigger and more sustained the impact that this has on those commodity prices. This is only adding to the

supply and inflationary pressures that were already present before the war.

The Luna View
Trying to second guess the next development of this war, whether that be further escalation or de-escalation, is fraught with danger because ultimately only one person seems to be driving this and his ultimate goals remain unclear.

With these developments it is key that our equity exposure is well diversified. We have exposure to commodity based companies in portfolios and we also have exposure to cyber security which will be crucial for both businesses and governments with Russia also carrying out cyber-attacks. We hope the war comes to a very swift positive end for the Ukrainian people.

Short Term Market Sentiment
When markets go through periods of volatility, a lot of bad news can be reflected in share prices and broader stock markets very quickly. Investor confidence (or sentiment) is always a key driver of market movements and given the current level of uncertainty over various events detailed earlier, this confidence is at low levels right now.

One of the ways that we analyse this is by looking at the VIX (Fear) Index which has spiked in recent weeks. Over the last 20 years, this ‘fear’ index has only been higher during the heights of Covid, the financial crisis and the Greek debt/Euro crisis. The key connection with all these events was that they were good longer term buying opportunities.

Another example, is the graph below which is a sentiment indicator. This highlights that investor sentiment has rarely been lower and indeed was last at current levels way back in 1990. At these times, it is generally investor sentiment, rather than company results and market valuations, that are behind market movements. Regardless of the attraction of current market valuations following the recent setback, we will only witness an improvement when sentiment improves although experience suggests that this can change very quickly. 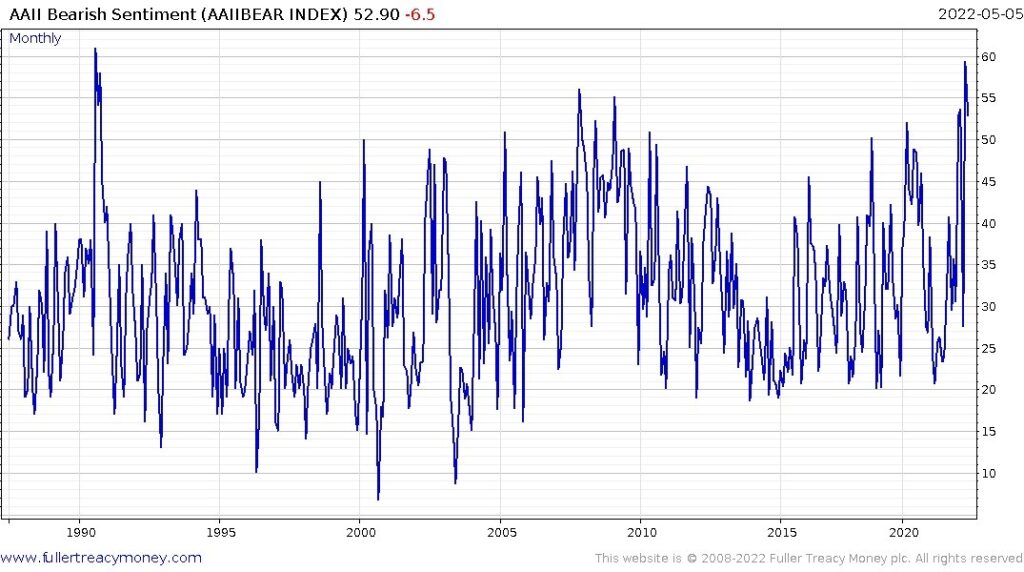 Thinking Longer Term
So far, we have focused purely on the short-term impact on markets. Our focus is always on taking the longer term view, particularly during times like we are going through at the moment. We do this because it stops us getting dragged into the short-term nervousness of investing, stay rational and most importantly it matches investors own investment time horizons.

The chart below shows how damaging missing a small number of the best days would have been if you had invested in the global stock market over the last 20 years. When it comes to investing, doing nothing is often best.*

Looking forward it is likely that the current Covid situation in China, the abhorrent events in Ukraine and inflation/ interest rate backdrop will remain in the immediate short term. However, there are reasons to be optimistic, we have seen waves of Covid restrictions over the last two years and bouts of short term volatility are normal when being
invested.

The Team at Luna have seen the Dot-com Bubble in the late 1990s, the financial crisis in 2008 and the selloff following the pandemic in 2020 to name but three. The irony is that historically many of the stock market’s best periods have tended to follow some of the worst days.

As humans we can often be too emotional about the decisions we make when markets dive and it can lead us to panic and sell; when shares have had a good spell, those same emotions can lead us to go on a buying spree. Please remember Warren Buffet’s famous quote “Be greedy when others are fearful”. There’s certainly a lot of fear present.

The content in this publication is for your general information and use only and is not intended to address your particular requirements. Articles should not be relied upon in their entirety and shall not be deemed to be, or constitute, advice. Although endeavours have been made to provide accurate and timely information, there can be no guarantee that such information is accurate as of the date it is received or that it will continue to be accurate in the future. No individual or company should act upon such information without receiving appropriate professional advice after a thorough examination of their particular situation. We cannot accept responsibility for any loss as a result of acts or omissions taken in respect of any articles. Thresholds, percentage rates and tax legislation may change in subsequent Finance Acts. Levels and bases of, and reliefs from, taxation are subject to change and their value depends on the individual circumstances of the investor. The value of your investments can go down as well as up and you may get back less than you invested. Past performance is not a reliable indicator of future results.